Right now, Vogue Auto Design is a name that the majority of Australia’s car nuts would be unfamiliar with. Across the globe on the European continent, VAD have been pioneering the distribution of high quality wheels and other vehicle modifications for the last 15 years. They are also the crew behind Europe’s very first RWB Porsche, and what’s more – they’re bringing RAUH-Welt to Australia. If you didn’t know about VAD before, you most definitely do now. 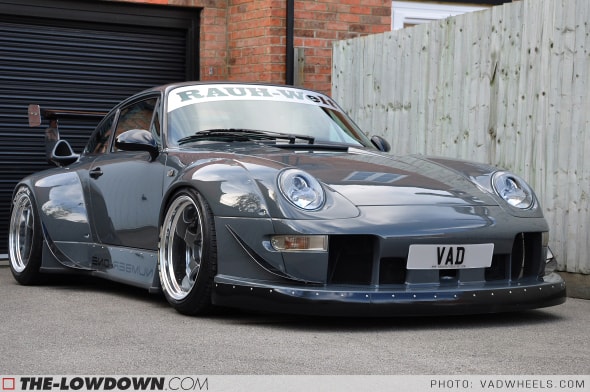 The car above is ‘Number One’; the First Porsche of its kind in Europe. Based out of the United Kingdom, VAD recently brought RWB founder, Nakai-san, to their British workshop for a first-hand look at how he crafts these unmistakable creations. 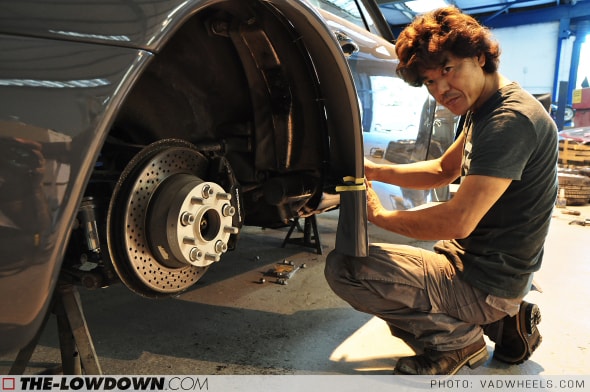 The fascination with RAUH-Welt Begriff has reached fever pitch over the last few months. RWB had humble beginnings on the mountains of Japan in tuned AE86 Corollas, but in the last few years Nakai-san has turned his attention to the classic 911 Porsche and the results have seen his brand become internationally sought after. 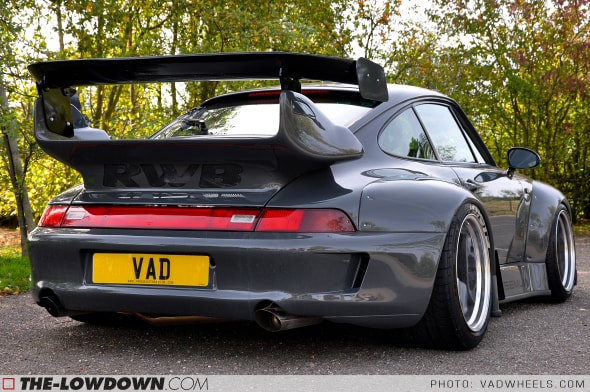 We spoke with Lee at Vogue Auto Design about their connection with RWB and what it means for us here in Australia. “I have personally been after the RAUH-Welt brand for three years,’ said Lee. “My first contact was for a good customer of ours who was desperate to have the RWB conversion carried out on his 993 Turbo. Unfortunately we were told that the car would have to be sent to Japan as RWB would only perform the conversion themselves.” 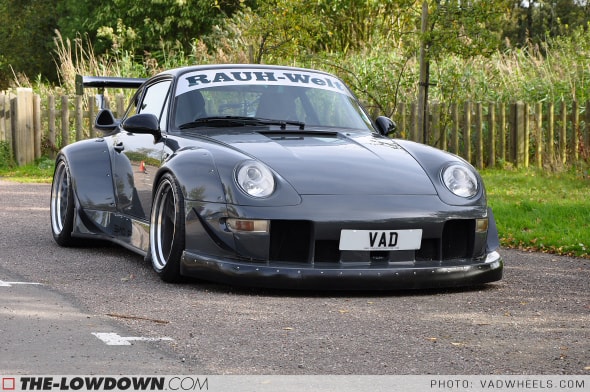 “My customer was just not prepared to send his Turbo to Japan, so we had to give up on that dream for the time being,” explains Lee. “In July this year we followed various stories about the brands expansion as the RWB business gathered pace. Toshi-sans ‘Rough Rhythm’ car was really in the spotlight. For me I was still hooked on Nakai-sans own ‘Royal Montegobay’ and the rebranded ‘Tunerhaus’ 993R which had caught my attention. It was the colours of those cars which really showed the aggressive lines and just how wide the body is. We wanted one, and just had to build one, so we got in touch again and received the reply we wanted to hear!” 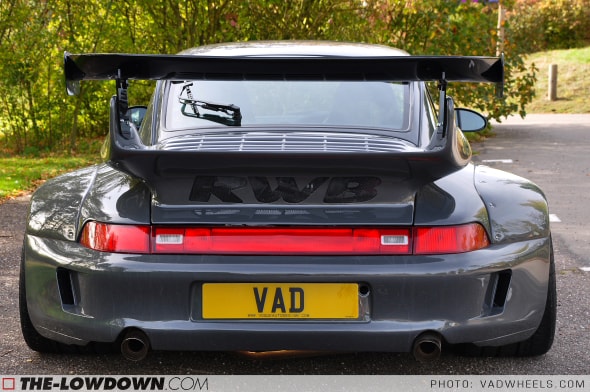 “Toshi, the international RWB director, shared the same visions for RWB’s growth; and we shared his passion for all that is RAUH-Welt. We showed him a selection of our previous builds including the Bentley Premier 4509 wide body, our own wide body Cayenne Bi-Turbo and 650bhp 997 Turbo. Toshi liked what he saw and agreed to send the 993R parts to us.” 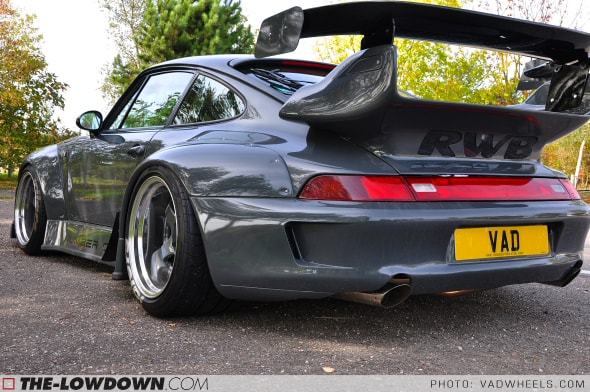 With a complete RWB system on its way, a donor car had to be found. “We managed to find a one owner 993 Carrera C2 in mint condition,” said Lee. “The car had to be completely stripped down including the interior.” 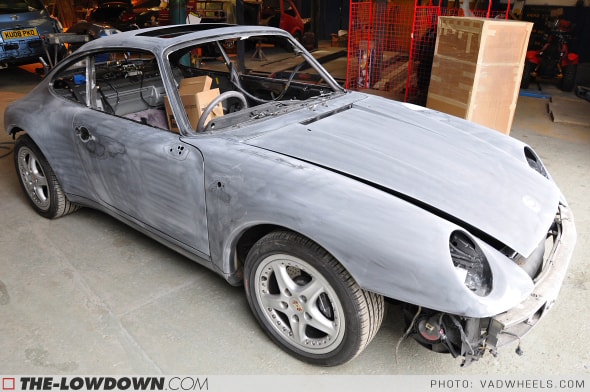 “We set to work changing the colour to Lamborghini Grigio Telesto, and giving the interior a full alcantara makeover,” recalls Lee. 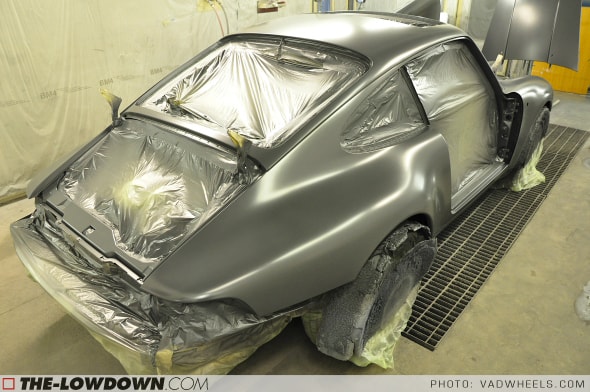 Lee went on to explain further about the interior, “Our cabin incorporates alcantara on the dashboard and new RS style door cards.” 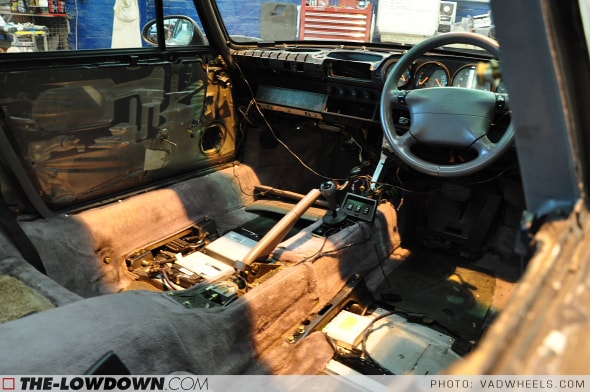 “The seats are full carbon fibre backed GT2 items to complete the interior look. Even so, this is a road car and not a race car; Nakai-san loved the full interior detailing, saying it was an RWB first to have a complete, functional interior and tiptronic transmission.” 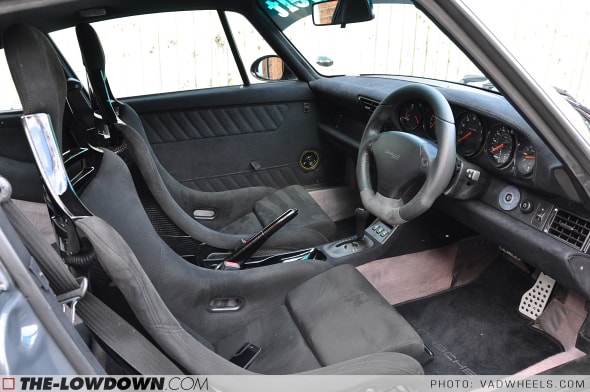 The kit eventually landed in August of this year. Nick had it painted ready for Nakai-sans arrival. “Nakai-san was very impressed with the finish of the car, especially the paintwork. He fell in love with the colour and over a period of days showed us the RAUH-Welt way of fitting his aero kit.” 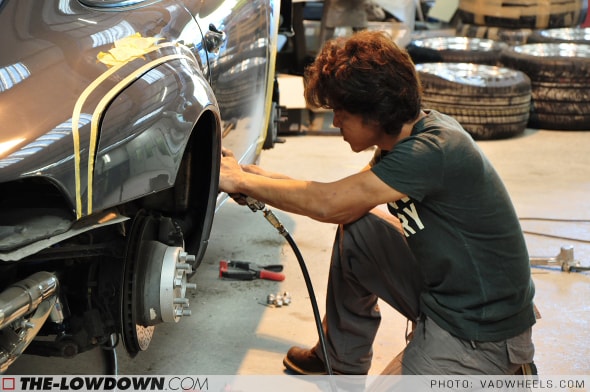 Large sections of unwanted factory bodywork have to be cut away. The RWB conversion is not for the faint of heart as there really is no going back. Nick, head of VAD operations in the UK, spent some quality time with Nakai-san observing the procedure. 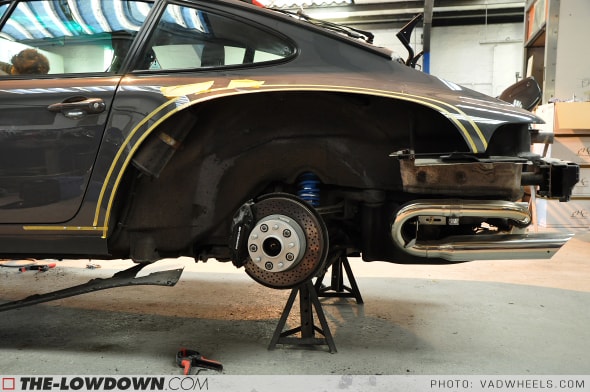 “Overall the install was quite easy and one we could definitely have handled, but as Nakai-san wanted to fly over and personally fit the first kit on the first European car, it was an honour and privilege to watch the master at his craft,” said Lee. 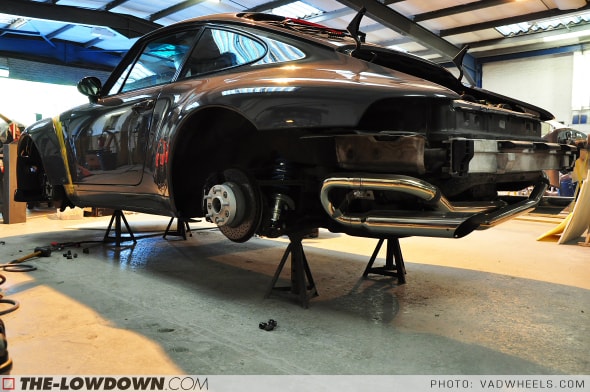 Other parts were also upgraded while the RWB kit was being fitted. Nick had a bespoke stainless steel exhaust system built including custom headers for the flat-six. All of the engine’s breathing has been upgraded with new filters and an ECU remap with very healthy results. 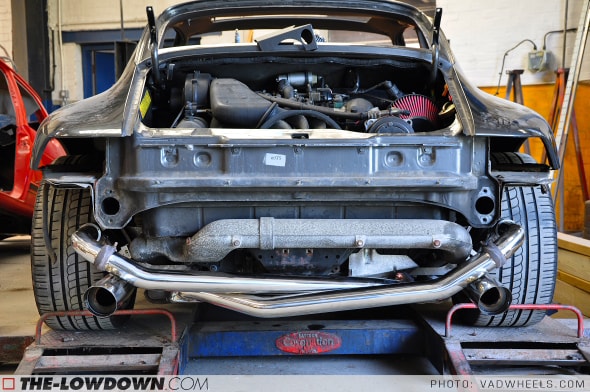 The 993 is fitted with Bilstein coil overs built to RWB specifications. Currently the setup is wound down to its lowest setting for the correct stance. Naturally the car had to have the RWB signature SSR Professor SP1 wheels with colour coded centres. Sizes are 18×10.5in at the front and a huge 18x13in rear, shod in 265/35 and 335/30 size tyres respectively. 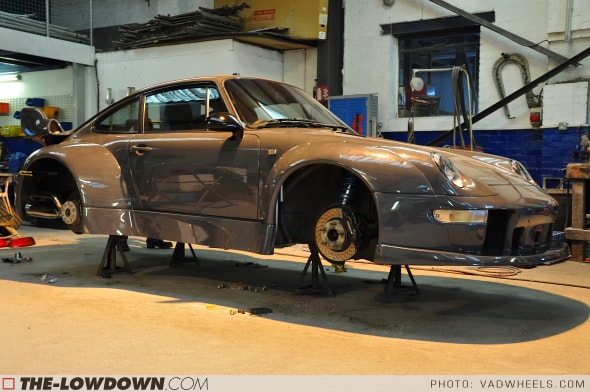 As a bespoke three-piece wheel specialist, VAD values proper fitment and sizing. “We adore the SSR SP1, and they suit the car perfectly, but they are very heavy and with the gigantic extended arches we have to use spacers to fill the body out,” explains Lee. “This simply goes against the grain for VAD so we are custom building our own RWB forged wheels at the moment. There will be a five spoke and a mesh design and both will be a direct fit for RWB cars – no spacers necessary.” 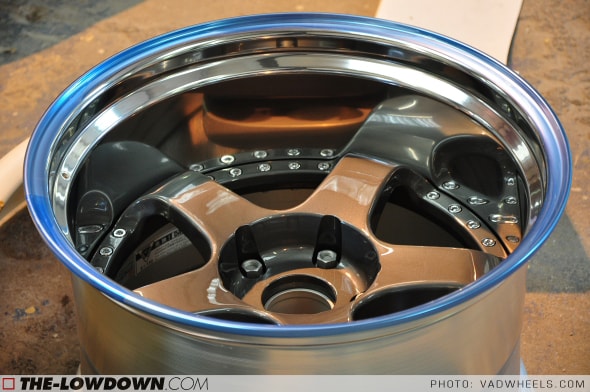 Above is a sneak peak at what VAD have in the pipeline. Sizing on the rear is 19×13.5in. Also in the works are billet centre caps with the RWB insignia CNC machined into them.  “RWB are keen to offer these wheels to their own Japanese customers. You can expect updated shots of the new wheels on our car by the end of this month,” says Lee. 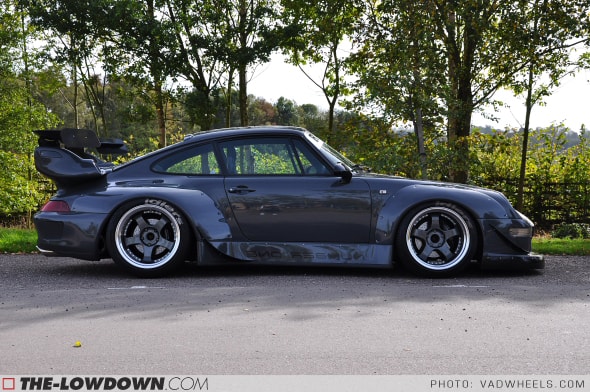 Nakai-san personally names each car that he builds as part of the RWB package. Each customer can only have one car built. Lee explains the thoughts behind the ‘Number One’ name. “Names seem to come and go in Nakai-sans head. He had a couple of ideas for ours but I think with it being the first European RWB car and the first with an interior of its kind, plus the fact that the car has been finished to perfection he felt the name ‘Number One’ was what it should be.” 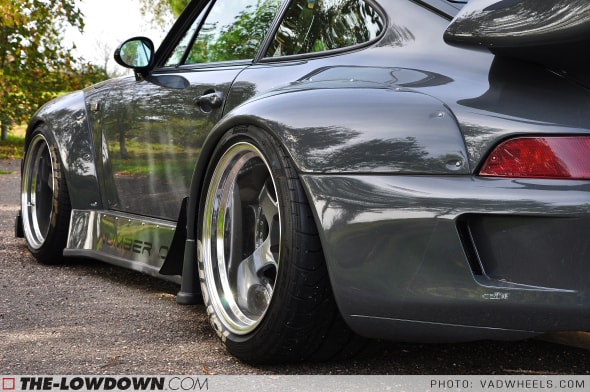 So what does the future hold for Vogue Auto Design? Well this is where it gets really exciting. “We will be building an Australian car,” says Lee. “Now that we have opened VAD on Aussie shores in Perth, we have brought with us distribution rights for the RWB brand.” 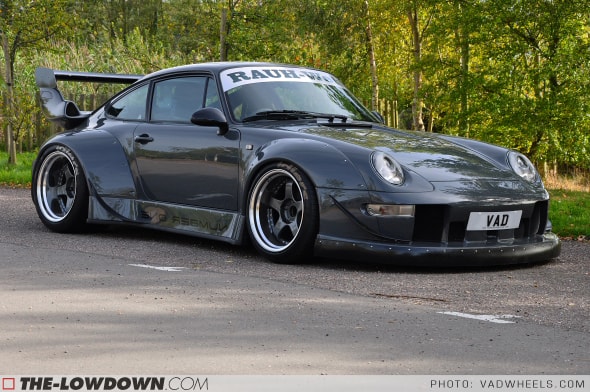 “The first Australian RAUH-Welt car could be a either a company demo car of our own, or if a customer wants one Nakai-san will personally build the first one, either a 964 or a 993R wide body.” 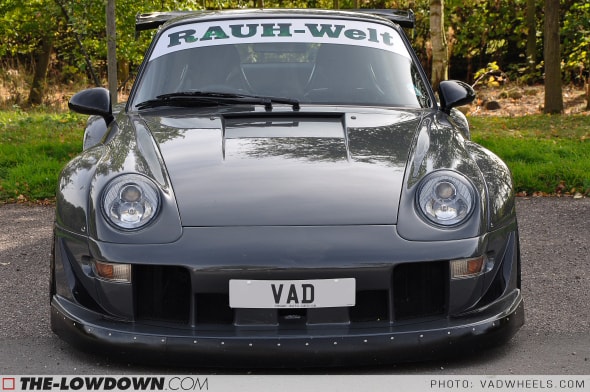 Lee dropped more key information in our chat about future RWB developments. “RWB is also working on a new 996 wide body programme and from what we have seen it is awesome. There is also a possible RWB+VAD collaboration for another model but that is a future project.” 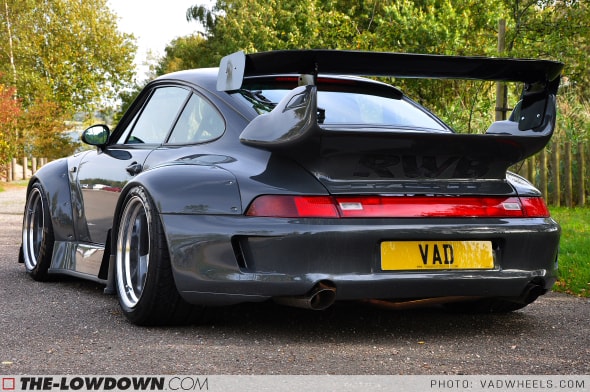 VAD’s main business is three-piece alloy wheels for all applications. They do every brand of Japanese wheels you can think of from Work, SSR and Weds through to Trafficstar, Garson, Crimson, Lowenhart and Racinghart. They also offer a range of forged wheels from the United States including DPE Forged, D2 Forged, ISS Forged, 360 Forged and Luxury Abstract Forged. 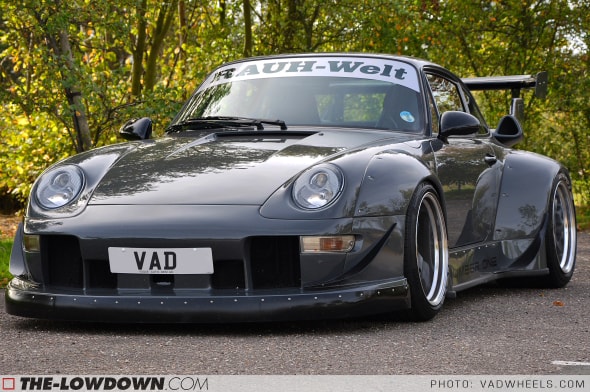 Lee proudly explains that VAD can build wheels for any car, in any spec, any width, any size, any offset and any colour whether you want forged, one-piece super light-weight or three-piece light weight. Their specialties are tuner fitments and one off bespoke builds that include everything from race cars with centre-lock hubs to every day enthusiast cars.

If you are keen to find out more, don’t hesitate to investigate their website which can be found here. Here’s hoping the first Australian RAUH-Welt masterpiece is not far away!