A Look Back at Some of The Most Influential Racing Games

What do you consider the most current influential racing games on offer? Is it the Forza Motorsport series? The Gran Turismo or Need for Speed franchise? Perhaps you’re a little hardcore and prefer the likes of iRacing, rFactor or Assetto Corsa.

Irrespective of your answer, there is no denying that if you were born in the late 80’s or early 90’s that you probably grew up playing some of the same racing games we did.

We’ve compiled a list of some of our favourite racing games that influenced our passion and kept us glued to them screens starting from 1986!

The first game on our list is probably one of the most iconic. Who could forget the opening stage, controlling a Ferrari Testarossa racing alongside a sunny beach with bright sands, palm trees, cumulus clouds and deep blue skies.

The objective was simple enough, make it to the end of each stage before time runs out while trying to avoid traffic. Passing through checkpoints along each stage awarded you with extra time.

OutRun even offered you the choice of music to listen while driving, represented as radio stations!

Test Drive was huge for us. It was one of the first true 3D engine driving games we ever played. It also didn’t have a preset course, giving the player the power to decide their own route to the destination – You could even drive off road onto grass, over hills and into farms!

If that wasn’t already enough, you also needed to be cautions of the authorities and ensure you were doing the speed limit as they approached to avoid getting caught.

Test Drive also had in-car features such as programming your car radio, windscreen wipers control and the ability to turn your headlights on and off.

With three cars to choose from; a Lamborghini Diablo, Ferrari Mythos Pininfarina Concept and the Chevrolet Corvette CERV III Concept, Test Drive provided us hours of entertainment and was as close as a real driving simulator that the early 90’s could offer. 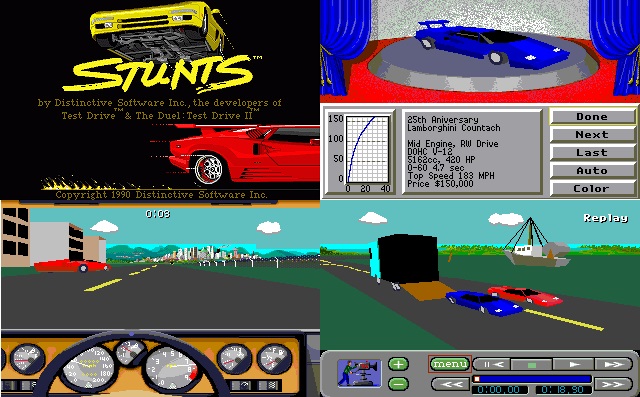 Stunts was another 3D car racing simulator released in the 90’s where you could either race against opponents or the clock around a race track consisting of loops, corkscrews, concrete barriers and jumps.

There was 11 different (real) drivable cars which even included an Acura NSX. Each car experienced different levels of grip depending on the surface you were driving on.

But where Stunts really surprised us looking back now was that it was relatively advanced with it’s in-game physics engine which could simulate over and understeer with the grip being proportional to the banking of a curve.

Stunts also allowed you to build your own wild tracks and terrain which kept the game fresh.

There is no dispute a race on Daytona USA can’t settle. Was the dispute amongst eight people? No problem, Daytona USA could cater for eight-player action which made it the king of the arcade.

The recipe for Daytona USA was simple, insert your coins, pick your race course (beginner, advanced or expert) followed by your selection of auto or manual transmission which lead to the iconic ‘Ladies and Gentleman start your engines’!

Your objective was simple enough, outrun the competing cars and completing the race before time ran out. 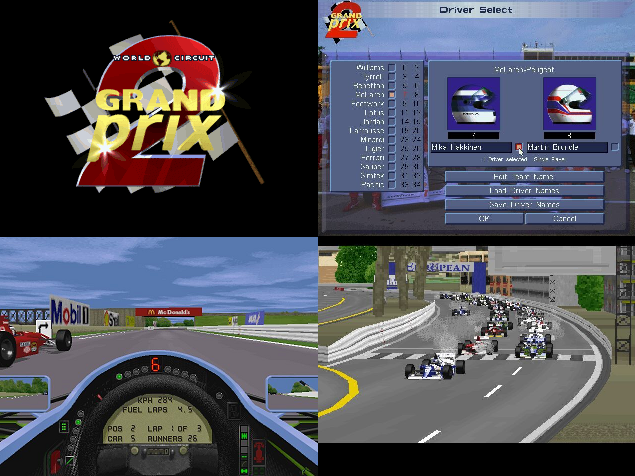 Released in 1995 for DOS, Grand Prix II was what started our obsession with Formula 1. Based off of the 1994 Formula 1 World Championship, lead programmer and designer Geoff Crammonds second racing simulation featured all 16 circuits and 28 drivers.

Grand Prix II had extensive depth for it’s time and encompassed 5 skill levels and 7 driving aids which could be turned on and off such as automatic brakes and a dotted ‘ideal racing line’ which we so commonly see in current racing games and simulators.

Although we were still quite young to completely appreciate the feature, Grand Prix II allowed car setups to be modified to high detail with a surprising degree of accuracy.

Grand Prix II was also one of the first games to simulate visual car failures. 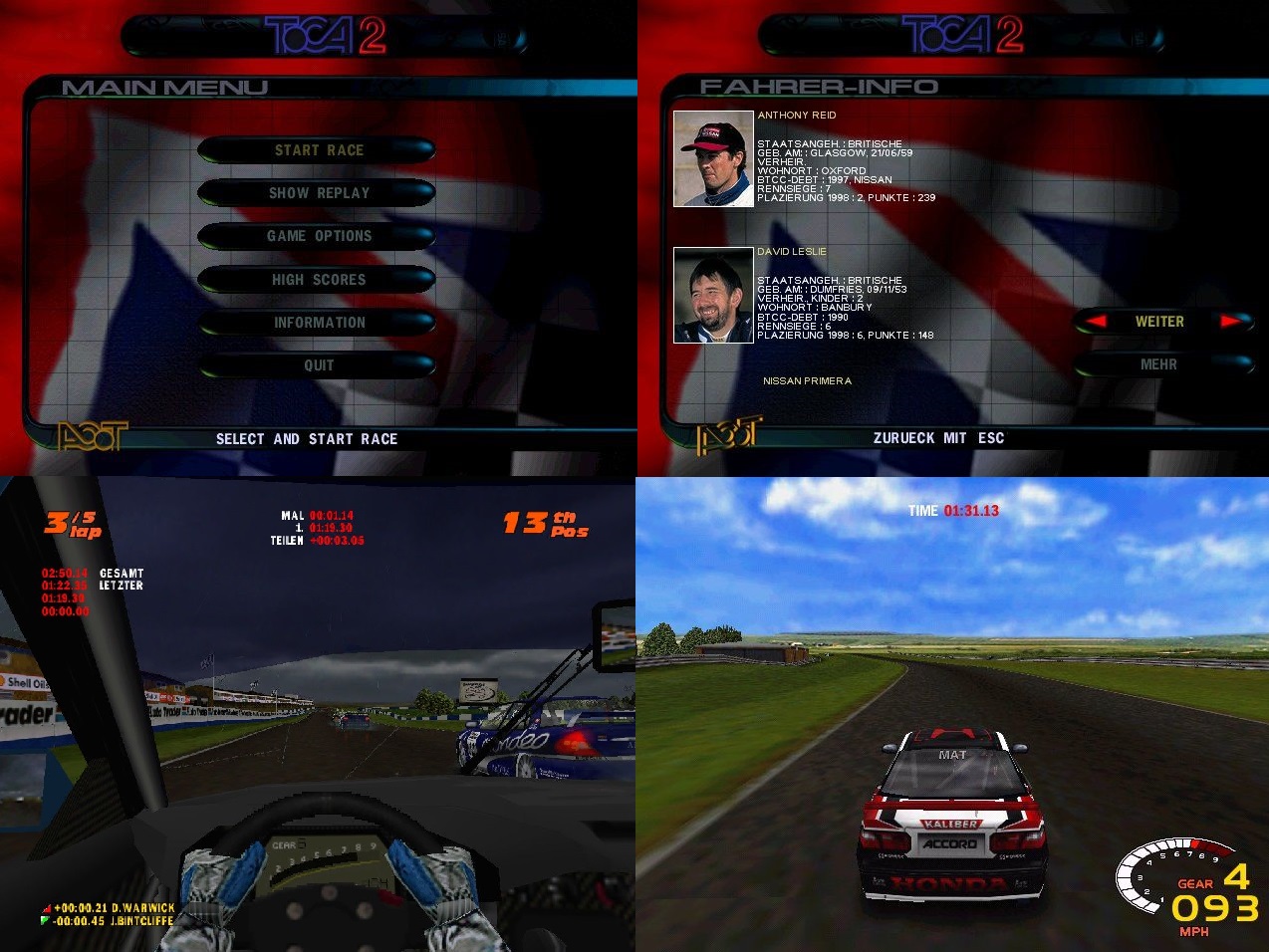 We had no idea what the BTCC (British Touring Car Championship) was until developers Codemasters brought us TOCA 2. The BTCC was Britain’s biggest domestic racing championship in the late 1990s and TOCA 2 recreated it perfectly. 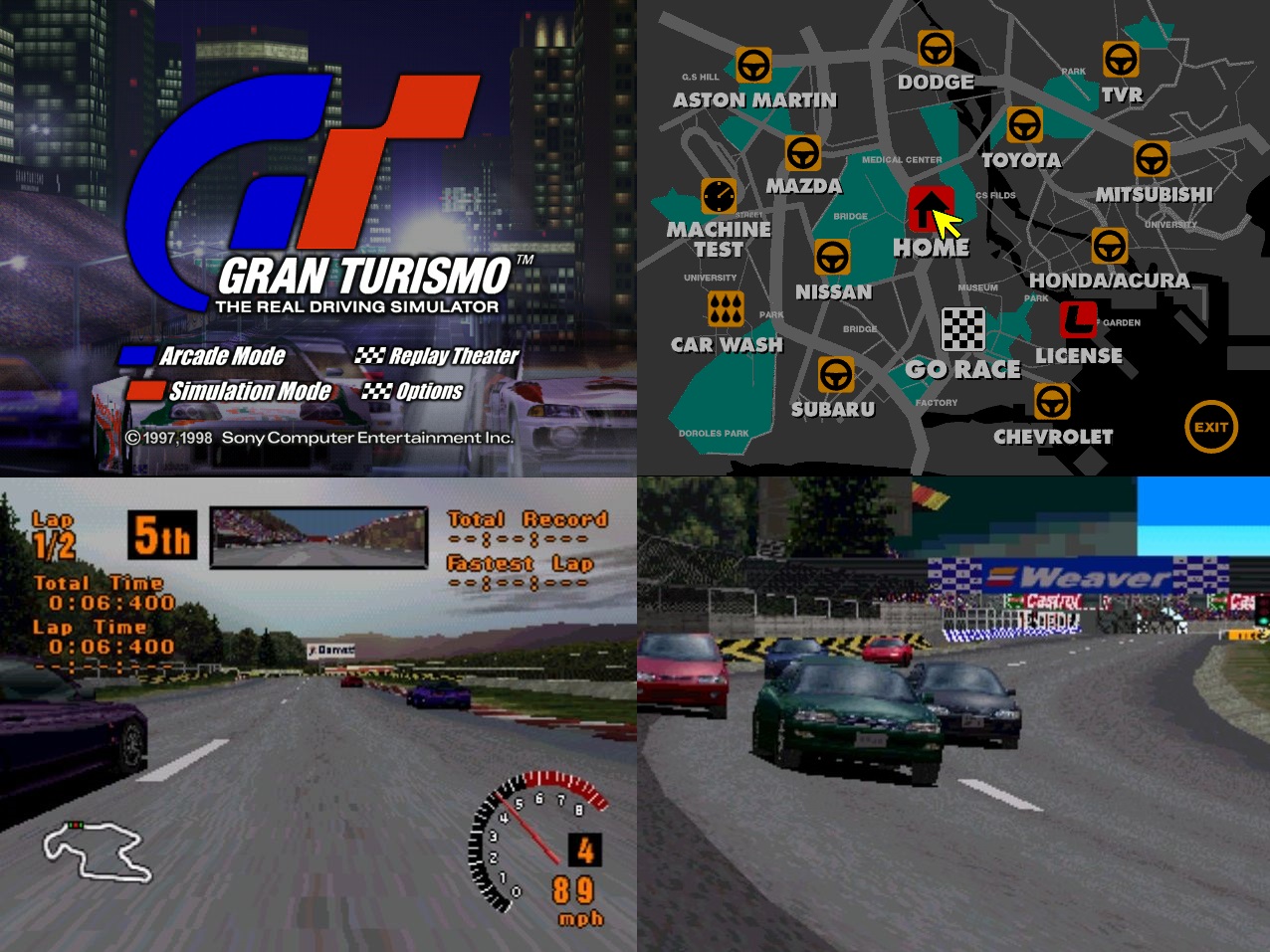 When Gran Turismo was released our entire lives were put on-hold. With over 140 cars and 11 tracks, we spent months if not years grinding our way through driver’s licenses and earning credits to purchase additional vehicles along with parts.

The simulation mode offered so much, it literally impossible to ever drop the controller and go to school, that was, until we purchased the Pikes Peak Escudo.

Gran Turimso truly wore the crown of the ultimate racing/simulation game for many years to come. Nothing could provide such depth, realistic physics, graphics and playability. 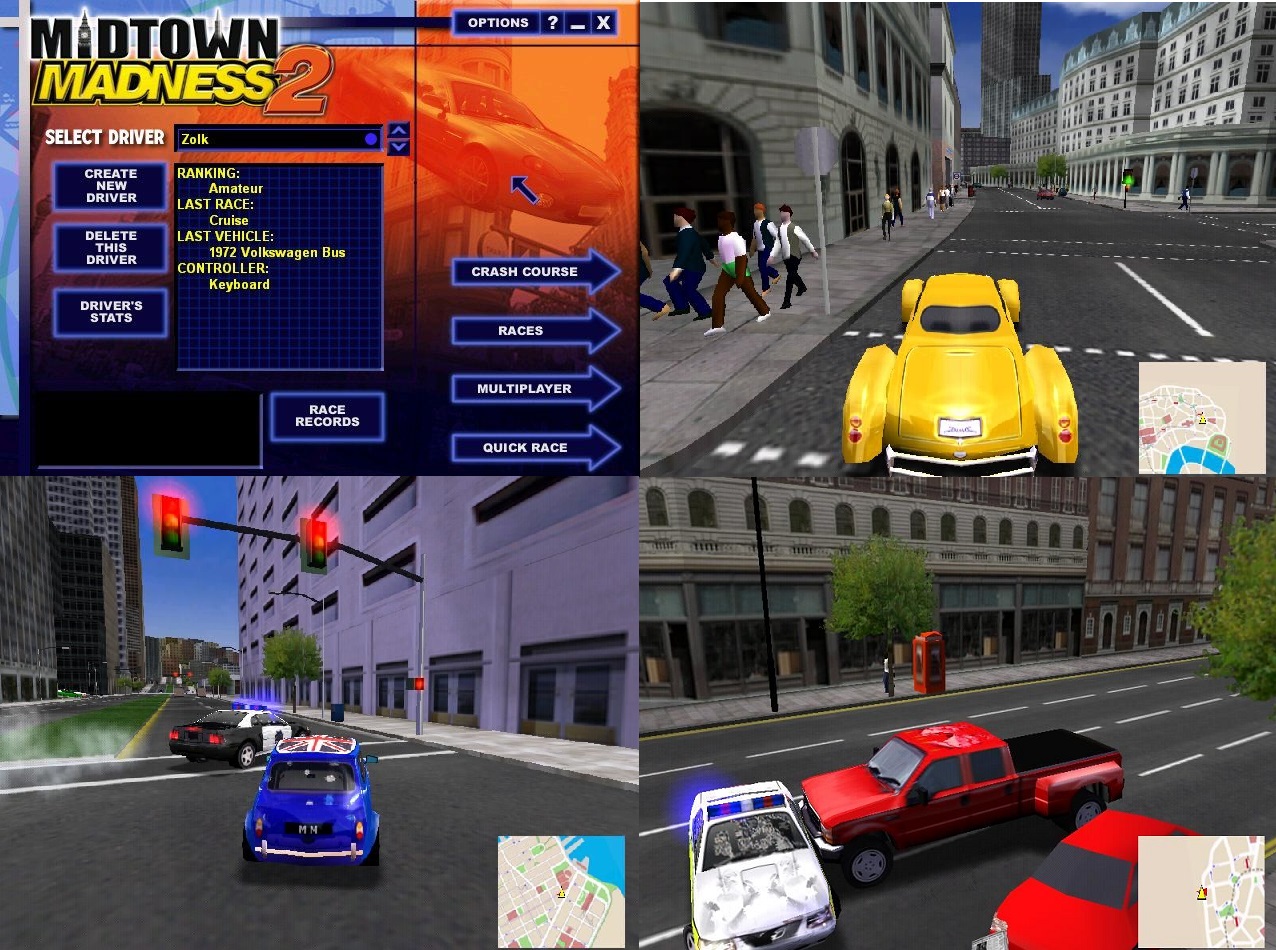 Midtown Madness 2 was a free roam racing game set in either San Francisco or London with a wide variety of vehicles to choose from, such as an Aston Martin DB7, a London Cab and even a Greyhound Bus.

Players could choose different game modes such as Circuit or Checkpoint racing, along with Cruise mode which allowed players to roam freely around the two open worlds. As sad as it might sound, we spent most of our time in free roam, pretending to be cab drivers, police and even fire men. 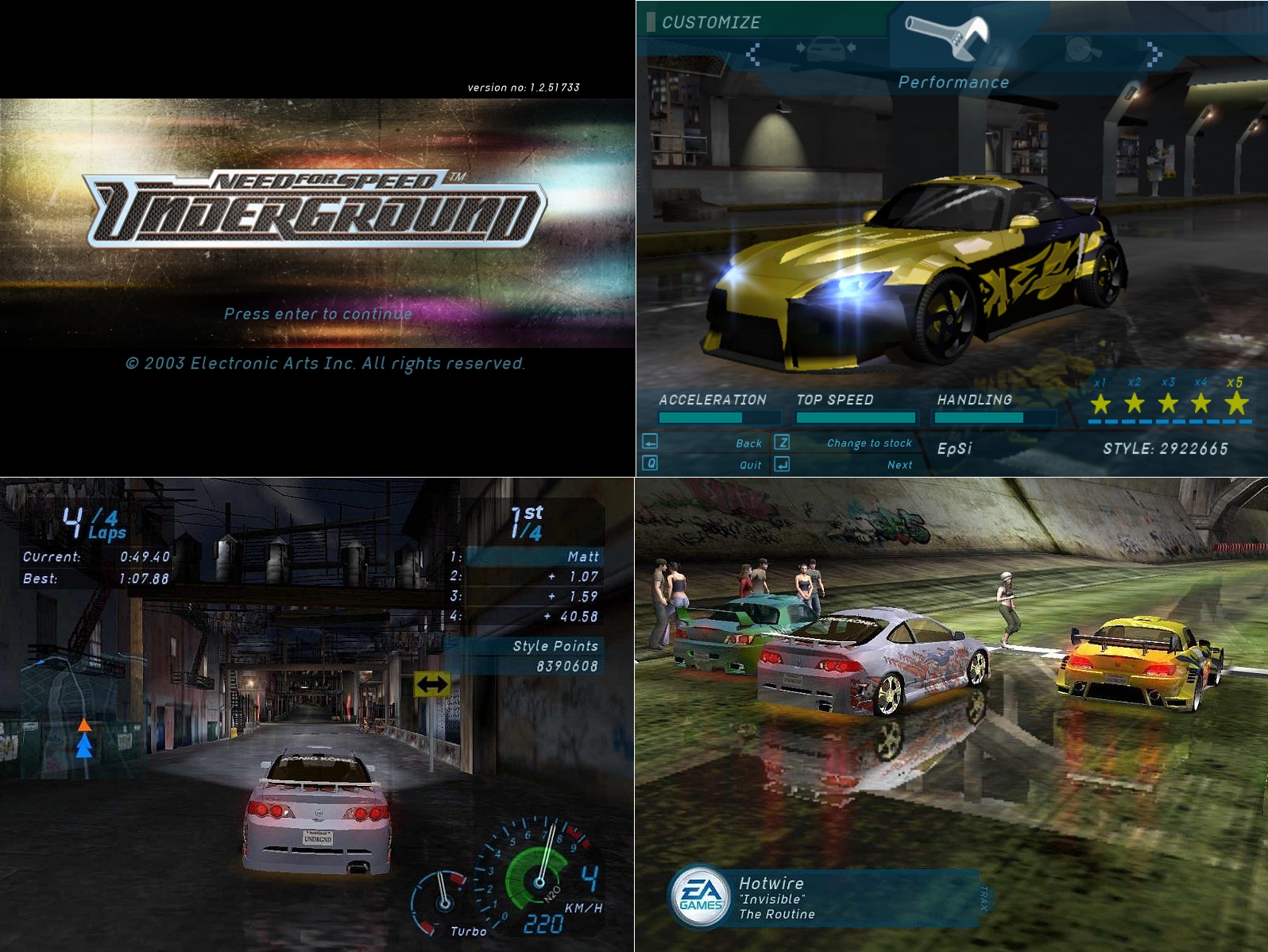 ‘EA GAMES, challenge everything!’ Sound familiar? Of Course it does, it was the beginning of the end of your childhood.

Need for Speed: Underground (NFSU) was the seventh game in the long running Need for Speed franchise and was no doubt the biggest release for us. NFSU completely ignored the recipe of it’s predecessors and offered a career mode featuring a storyline and a garage mode that allowed players to store cars.

Revolving around illegal night street racing influenced heavily from the Fast And The Furious, NFSU gave players a chance to build their own highly modified import vehicles from the ground up with hundreds of real licenses parts and cars to choose from.

NFSU never pretended to be a simulator or feature any exotic cars. It was a true gift to the import scene and a game we will forever remember.

Now that we’ve run through the games that influenced our youth there’s no doubt we’ve missed some of your’s. What racing games influenced and sparked your automotive passion?