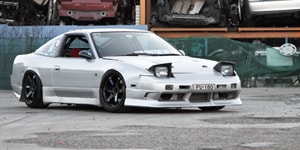 Internet fame is a term that gets bandied about a lot in the world of online forums, but if there is one car with more e-points than the rest it would have to be Biggie’s 180SX. Having owned this car since late 2005 Biggie’s build-up has garnered hundreds of thread pages across multiple forums, all of which give insight into FU-180. But as we found out, there is much more to the car and driver than digital build diaries and online chatter. 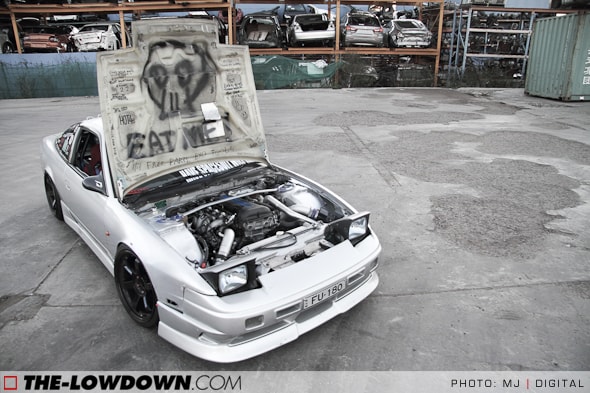 “I watched my 180 come into Australia when it was a totally stock Type X,” Biggie explains. “A close friend of mine was actually the one who first bought it and had it imported. It was a perfect auction grade 4.5 car with original everything apart from a set of Advan RGs. My friend had moved out here from Hong Kong and all of his workmates had Japanese cars so he bought this.” Back then tastes were very different and before long the 180SX had a giant rear spoiler, C-West body kit, Kakimoto cat-back exhaust and HKS decals all over the sides. “At the time that was what you did,” says Biggie. “It was so 2005 it’s not funny. People used to think it was so race back then. Eventually my friend went back to Hong Kong and that’s when I bought the 180.” 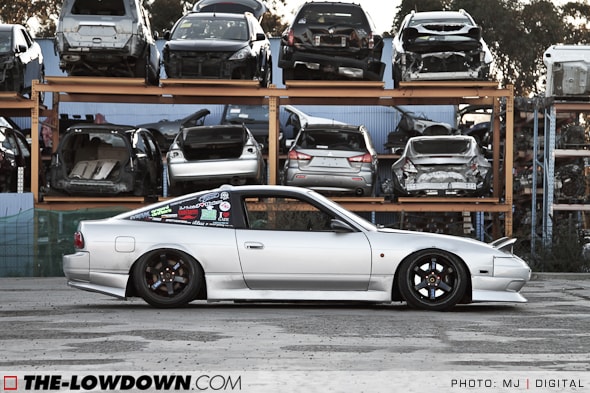 As a provisionally licensed driver there was no way to knock Tom (better known as Biggie) off his pedestal when he got his hands on the 180SX. “The first thing I did was take the helper springs out of the Super Street coil overs and wind them down as far as they would go,” Biggie explains. “Then I put 30mm spacers all around and I thought I was the king. We’ve come a long way since then!” laughs Tom. 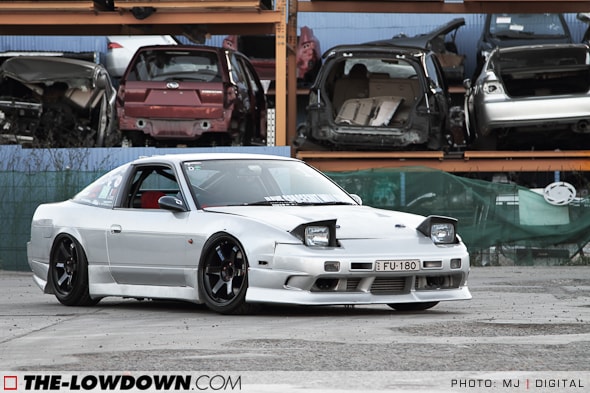 “I must have been about 18 or maybe 19 at this stage. I still had red plates and I thought the car was so fast,” Biggie laughs. “I had put a big sound system in it with a monster tacho and junk like that, then picked up a GT2510, PowerFC and Nismo 550ccs to give it about 180kW. All those mods cost a fortune back then,” he says. “Being new to the modifying scene it’s easy to spend way more than you should by paying retail prices and waiting for things to be shipped from overseas. That was my big problem.” 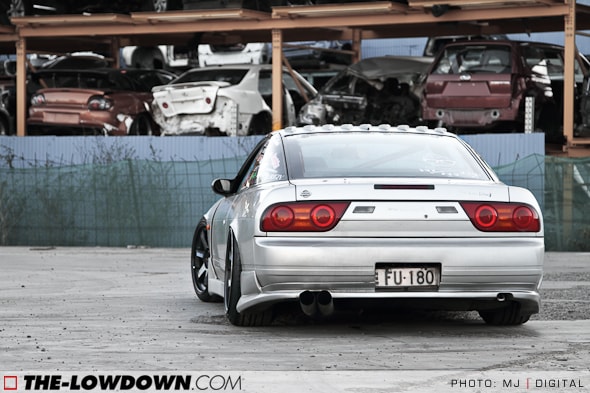 About now the discovery of Japanese style tuning transformed the 180’s build. “A good mate of mine had an S14 at the same time. We had a ‘low-off’ to see who could get their car slammed the furthest and stuff like that. I bought Brembos and adjustable arms and we started doing circuit days, like actual grip stuff. That was fine for a while until I found Drift Bible and old Option videos from Japan. That’s when the obsession really started.” 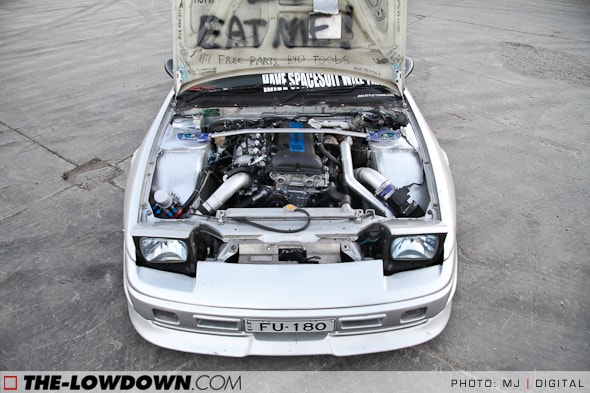 “One of the guys I knew who was into this same stuff had a Soarer of all things. It was a big heavy car but it made about 270kW through a welded diff. He took me for a ride that really opened my eyes,” Biggie tells us. “My mate with the S14 and I just kinda gee’d each other up and did this drift day at Oran Park. I had no idea what I was doing at that stage but we went to a few of these Oran Park days with other drifters and learnt how to do it.” 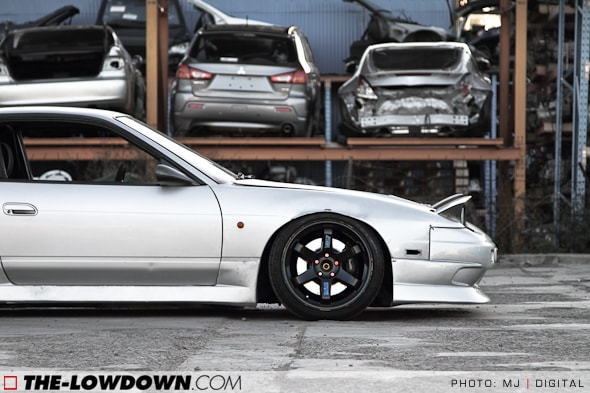 Grabbing the bull by the horns and going for it is one of the reasons Biggie’s build is so interesting. “I kinda learned everything the hard way and punished the car at the same time. My whole principle for the build was that if you break a part you have to replace that part with something better. But I also never cared about the car too much, I just wanted to be able to drive it.” 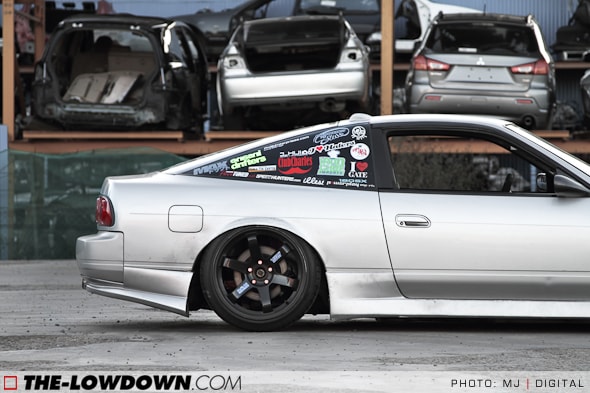 Tom drove FU-180 daily for three years at the same ride height you see here. The car has done its fair share of time on the street. “I’ve been defected 15 times, and I’ve been EPA’d. There’s been a constant struggle between loving and hating the car. I’ve blown it up and hated it, then rebuilt it and loved it again, then hated it for the amount of money it’s cost. It’s at the point now where it’s terrible to drive on the street with everything solid-mounted and rose-jointed. I guess I’m just getting old,” laughs Tom. “But I still really love it.” 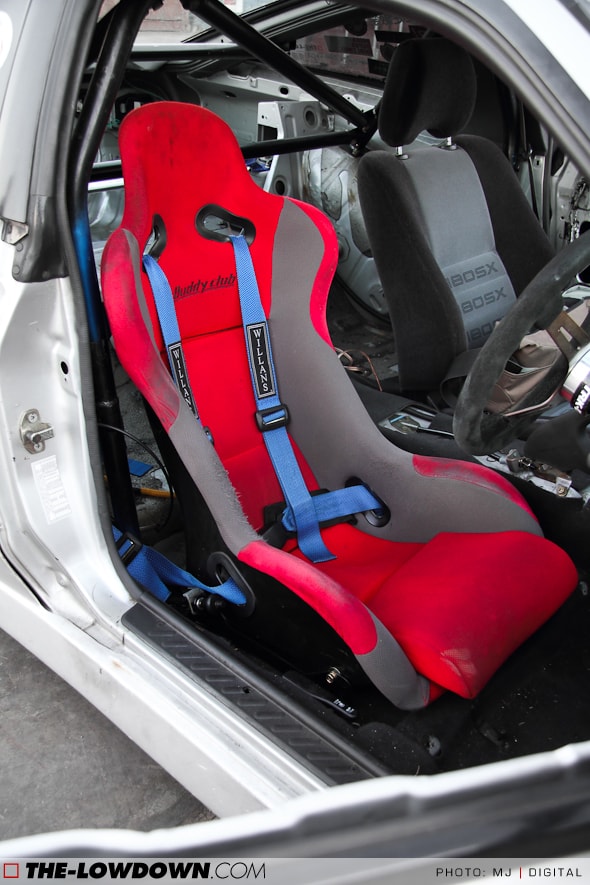 “Every Tuesday night a group of us used to get together and go out in our cars on the street. Today we just can’t do it anymore. You could get away with things even just two or three years ago; someone would ask you to move along and that was it. These days people have lost licenses and stuff, plus our cars have more power and all that to the point where you can’t use them properly on the street. We’ve all had to wise up and now I just want to drive the wheels off the car at the track.” 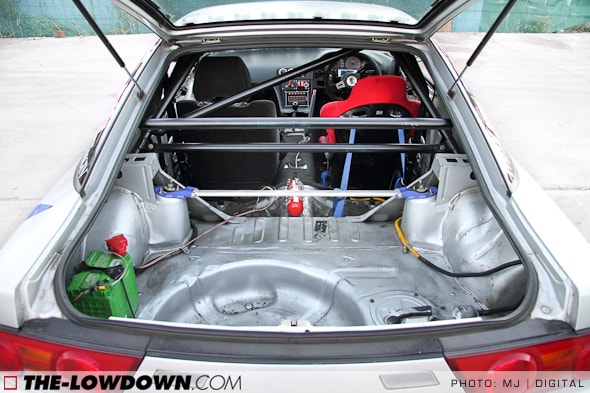 Fans of drifting in New South Wales will have seen Biggie at Twilight Drift events and almost anything else drift related happening in this state. “These days I am much more about the driving and less about the scene. I want to be out there behind the wheel as much as possible. I may still suck but I’ve been going to every day that I can.” 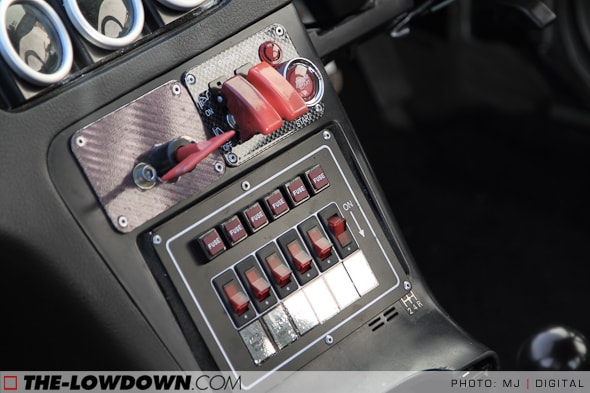 As for what comes next, it all depends on fate. “I need to put a proper cage in the car next. Then if I crash the car I’ll go wide body and paint it. If I pop the motor I’ll either go for a VET build, a dry-sumped RB26 or an LS2. I’m not as much of an SR20 purist as I was before. I just want to do big skids basically,” Biggie smiles, and that pretty much sums it up perfectly. 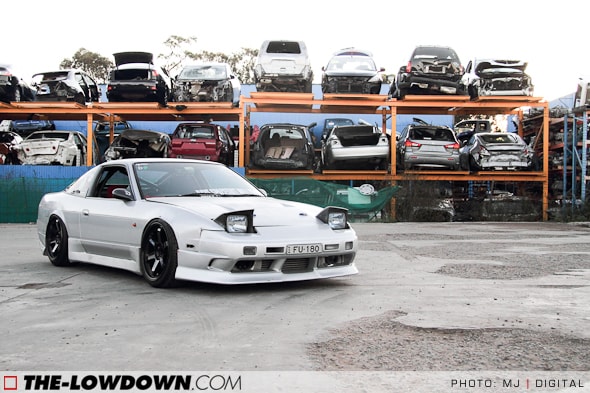 EXTERIOR:
– Type X front with N1 fibreglass copy lip
– Nismo aero side skirts
– G Grow rear valance
– Unknown $50 fibreglass bonnet
– Hammer pumped rear guards
– Tyre pumped front guards with spaced out bottom
– Tubbed front end
– Four different shades of silver that I touch up from time to time
– Roof fins off a truck that everyone hates so I’ve kept them
– Stickers from all over the world